After the United States pulled out of the nuclear agreement with Iran, however, the five remaining powers that took part in formulating the deal – including Russia, China, France, Britain and Germany – met in Vienna over the weekend, in a coordinated effort to preserve the multinational accord. “Our Iranian colleagues are sincere. And we were given the impression that they for their part are to continue to safeguard and implement the agreement, though they indicate that perhaps it would take them about two to three weeks to finally decide whether they are to stay in the nuclear deal,” Director General of Arms Control at China’s Foreign Ministry Wang Qun said.

Iran’s deputy Foreign Minister noted, following the meeting, a ‘sense of seriousness’ from the five world powers; asserting the agreement’s survival solely dependent on the will to preserve the interests of the Islamic Republic. “We got the sense that Europeans, and Russia and China – as remaining participants in the JCPOA are serious. They recognize that the JCPOA’s survival depends on interests of Iran to be respected,” Iranian Deputy Foreign Minister Abbas Araghchi said.

During the meeting, the International Atomic Energy Agency presented the representatives of the five major powers with a confidential report that claims Tehran’s ongoing compliance with the Joint Comprehensive Plan of Action – the technical term for the 2015 nuclear agreement with Iran – a report that apparently boosted their declared resolve in preserving the agreement. “The director general of the IAEA came to the meeting and confirmed once again that Tehran fully complies with its obligations under the deal,” Russian Ambassador to the U.N. in Vienna Mikhail Ulyanov said. 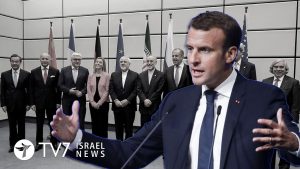 Without Washington’s support, and amid crippling international sanctions, European officials told TV7 that the agreement’s survival is more than questionable. That is why, French President Emmanuel Macron tried to convince his American counterpart, President Donald Trump, to preserve the multinational deal – efforts the French leader admitted ‘were unsuccessful.’ “I couldn’t convince (U.S.) President Trump regarding Iran (nuclear deal), but in any case, I tried to convince him. I stood in opposition saying that we have signed this treaty (2015 Iran nuclear deal) specifically within the multilateral framework and I believe that this particular approach allowed for a certain openness and President Trump acknowledged this openness. Here we are talking about the kind of openness where we can try and move towards a different set of terms within the treaty. I believe that President Trump abandoned the 2015 nuclear deal because it was signed by his predecessor,” French President Emmanuel Macron said.

President Macron, during the International Economic Forum in the Russian city of Saint Petersburg, stressed the need to continue discussions with Iran on its destabilizing behavior across the Middle East, actions that the French leader stressed ‘instigated legitimate concerns from both Israel and Saudi Arabia.’ Macron noted that the only way to move forward on a viable solution is through dialogue that will ultimately alter Iran’s behavior – a basis for the return of United States. “We now need to continue our discussion with Iran in order to convince the United States to gradually return to the discussion because we will expand the framework, not because we are giving up on the 2015 treaty but because we are responding to a very legitimate concern from Israel and Saudi Arabia. To a larger extend, we are thinking about the need to stabilize the whole region. So I believe that the kind of dialogue that I had with President Trump was very necessary and very useful because it enabled us to open up about this particular point and allowed us to moved forward,”  Macron said.