Israel’s Shift From Eucom To Centcom, A Mixed Bag

Late last week, having been scooped by the Wall Street Journal, the Pentagon issued one of the last statements under President Donald Trump as its Commander-in-Chief and Christopher Miller as his last, and Acting, Secretary of Defense. It had to do with a bureaucratic map redrawing – one potential Theater of War losing a country to another. 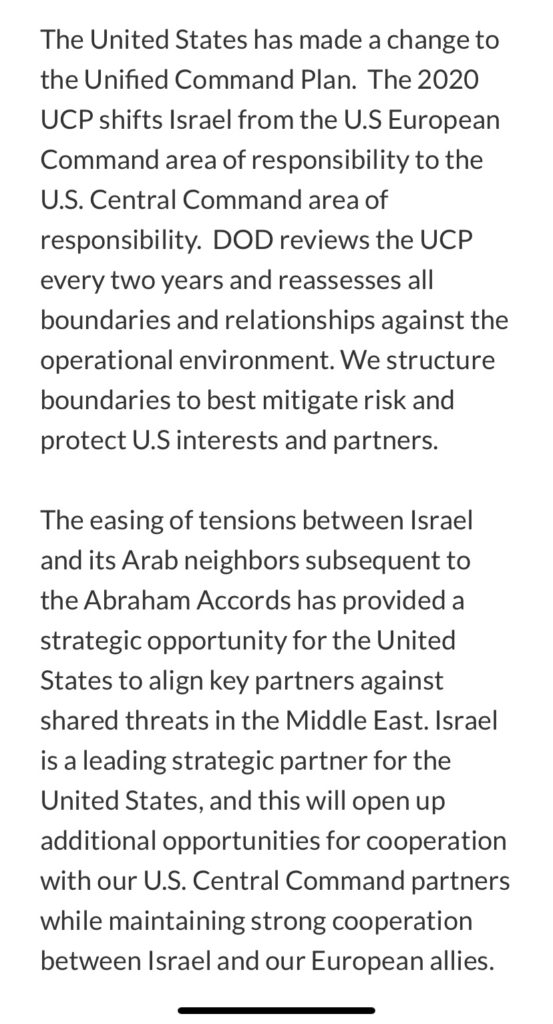 Israel’s Defense Minister, Benny Gantz, welcomed the move. While he misspelled the acronym for the Joint Chiefs of Staff, which is JCS rather than JCOS, his intention was clear. Gantz tweeted: 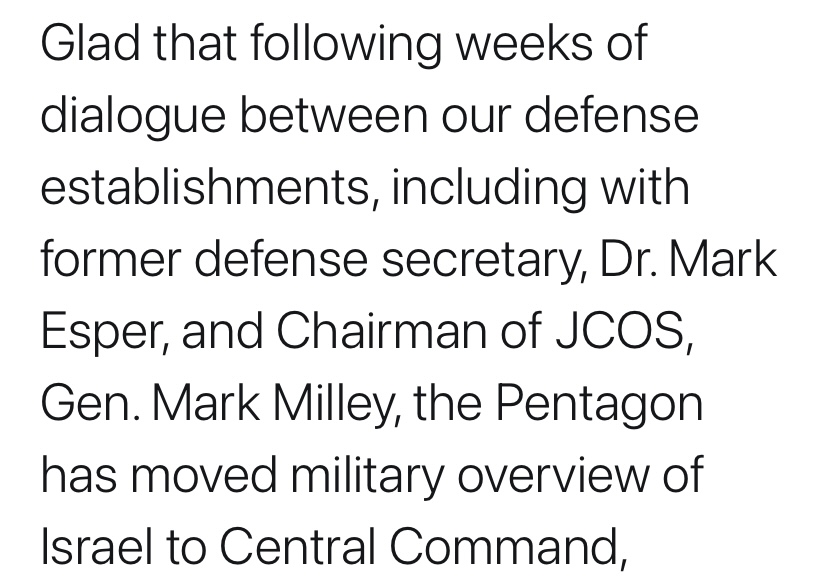 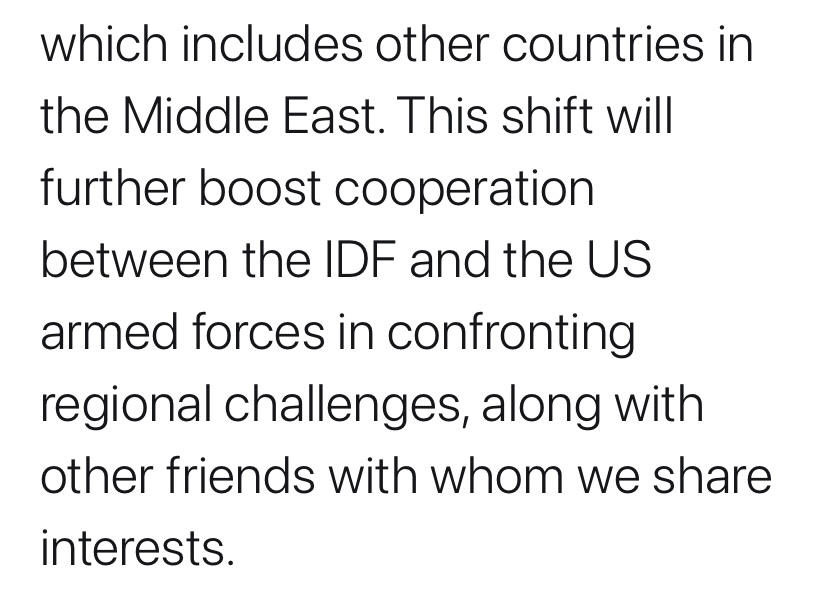 Hauling Israel out of EUCOM and into CENTCOM did not cost the Defense Establishment in Northern Virginia and Eastern Tel Aviv anything. No cargo plane or ship had to actually lift equipment across oceans and continents. The Earth did not shake under anyone’s feet. Yet, it is a significant move. Whether worth the effort, remains to be seen.

Israel always had a split personality. Created mostly by European Jews and Euro-centric, but stuck in the Middle East with Arab neighbors who insisted on also being its enemies. It lived in both worlds, resented by the closer one and trusting the farther one to save it from destruction. A Mediterranean country with its only open border the Western maritime one, Israel’s first inportant defense alliance was with France, a so-called “Bridge Over The Med”. When that faded, along with dreams of joining NATO in some form, it tried to have the US, from the Kennedy and Johnson Administration on, commit to sending the Sixth Fleet to help it if a Soviet-backed Arab coalition led by Egypt’s President Nasser threatened to overwhelm it. The European Command, which is dual-hatted with NATO’s American forces, one of which is the Sixth Fleet, indeed had contingency plans to intervene in a Mideast conflict. When Israel was in dire need of fighter planes, weapons and ammunition during the Yom Kippur War, they were all flown in, courtesy of the US, west to east.

With the focus on a World War 3 to be fought in Central Europe, or alternatively Korean and Vietnamese-style East Asian operations, up until the early 1980’s the Middle East, traditionally a British jurisdiction, was not deemed important enough to have a “com” of its own on par with the European and Pacific Commands.,The Pentagon assigned to it, should the need arise, forces in CONUS – the continental United States – or in Europe, under the Florida-based Strike Command or a sub-command of EUCOM headed by a Navy Admiral.

It was only after the Iranian revolution that a Rapid Deployment Force – rapid, in the cumbersome American system, could mean a couple of weeks – was formed. In 1983 it morphed into Central Command, mostly concerned with the Persian/Arabian Gulf and the double jeopardy to Saudi Arabia and its weak oil-exporting neighbors posed by Iran and Iraq. With Egypt at peace with Israel and allied with the US, the Arab-Israeli hotspot became Lebanon, which Israel invaded and where clashes with Syria soon engulfed American forces, too. A logical division of labor, and responsibility, for the time, was to keep Israel, Syria and Lebanon under EUCOM and put all the Asian Arab countries plus Egypt in CENTCOM.

Two important factors in that decision were the Soviet role in the area in general and in Syria in particular and the (non-Egyptian) Arab opposition to any contact with Israel. When the Reagan administration signed a strategic cooperation agreement with Israel, it made sure to describe it in anti-Soviet rather than anti-Arab terms (Israel wanted it the other way around). As both CENTCOM and the newly formed Special Operations Command shared their headquarters in MacDill Air Force Base in Tampa, Florida, with Arab military representatives present at CENTCOM, SOCOM was ordered to ascertain that Israeli officers were kept out of bounds. Visiting IDF chief Dan Shomron, commander at Entebbe and revered by special forces around the world, was even asked to respect the dividing line in the CENTCOM-SOCOM joint senior officers’ mess, lest a diplomatic scandal with Riyadh erupt.

Two wars with Iraq and common adversaries – Iran, el-Qaeda and Daesh, to name the most prominent ones – have changed all that. The US military cooperates with the IDF no less, and in a warmer brothers-in-arms fashion, than with any other military in the region. The IDF is closer in spirit to trusted American partners such as the British, Canadian and Australian militaries than Arab ones are.

About a dozen years ago, when Lt.-Gen. Gabi Ashkenazi was IDF chief and Admiral Mike Mullen CJCS, relations at the top reached a new height and stayed there. CENTCOM learned to be less concerned about adverse Arab reactions to the Israeli connection. Later on, a mechanism was established to co-ordinate between the IDF and JCS, CENTCOM and EUCOM. Venues rotate, but it is easiest to meet at mid-point, primarily at the Supreme Headquarters Allied Powers Europe residence of EUCOM’s chief near Mons, Bellgium. Hence “Chateau” as short for the meetings.

Over the last decade, relations in the EUCOM-IDF-CENTCOM steadily improved. The former chief at CENTCOM, General Joseph Votel, broke new ground by visiting Israel – eventually, four times during his tenure – after talking with Arab Chiefs of Staff to alleviate their concern. In memorable meeting, Votel and EUCOM (and NATO) chief General Curtis Scapparoti huddled with Israeli Defense Attache Maj.-Gen. Mickey Edelestein, a paratroop and commando officer held in unusual high esteem by his American colleagues, in a discussion presided over by Trump’s first and best Defense Sectetary, retired Marine Corps General James Mattis, himself extremely knowledgable as a former CENTCOM chief. Edelstein, along with Gantz’ successor as IDF Chief-of-Staff (2015-19) Gadi Eisenkot, is credited with forging extremely close ties between the Pentagon and Hakirya, the Tel Aviv defense compound.

Diplomatically, moving Israel from the EUCOM chart to the EUCOM column signifies its growing acceptance in the Arab world, and especially in the Arabian Peninsula. The relationship between the IDF and several regional militaries, most notably the Jordanian, Egyptian and Emirati ones, is excellent and leading the political echelons rather than following it.

Professionally, however, there is a price to pay when the primary becomes the secondary and vice versa. Israel benefits on two levels from its EUCOM relationship. It is a door to NATO, and a lot of experience has been accumulated in joint planning, training and exercises. The main burden of helping Israel’s missile defense if it is attacked by Iran is shouldered by US Army, Navy and Air Force units and staffs based in Europe. These protocols and drills are transferable to CENTCOM, but preserving the knowledge and making new acquaintances will be a challenge.

Additionally, EUCOM’s first customer, Russia, has for the last five years returned to the area in pro-active mode, via Syria. It will be more cumbersome for Israel to adapt to a new command setting in this regard, even while it has a deconflicting arrangement with the Russians in Syria.

As was seen in the Congress riot earlier this month, the sub-optimal (in Pentagon understatement) American ability to seamlessly work across organizational lines is still cause for concern, from Pearl Harbour to 9/11 to Capitol Hill. Crucial intelligence does not reach decision makers or executive agencies in time, or is not handed over properly from one command to the next. Terror squads have been known to flee capture because they left CENTCOM and went over to EUCOM, or PACOM, or the other way around, as the chain of custody and accountability over them was cut.

So to veterans of the Israeli-American defense relationship, it seems at first sight fine in theory but questionable in practice – a “if it’s not broken, make sure you fix rather than nix it” situation. The proof of the pudding, or in this case hummus, will be in the eating later on, provided the Biden administration, with another forner CENTCOM chief – retired General Lloyd Austin – does not revoke his predecessor’s hasty change and keeps Israel in the European Command, where it feels it belongs in song (Eurovision) and soccer.