The Israeli military continues to maintain a high state of alert along the northern border with both Lebanon and Syria, as it is currently unclear whether Hezbollah will perpetrate an attack against the Jewish State.

There are currently two schools of thought regarding Hezbollah’s intentions vis-à-vis Israel in the aftermath of the deadly blast that devastated Lebanon’s capital, Beirut. The first scenario entails abandonment of Hezbollah’s plot to launch an assault as it would be unable to withstand ramifications of a wide-scale military conflagration in light of Lebanon’s domestic challenges. The second, more alarming assessment envisions an attempt by the Iranian-backed, internationally-recognized terror group to shift domestic anger from Beirut’s Hezbollah-controlled government over accountability for Tuesday’s explosion to Israel – by drawing Israel into war.

And while the IDF is maintaining its preparedness to act against any threat directed at the nation, Israeli Prime Minister Benjamin Netanyahu extended official condolences to the people of Lebanon and reiterated its readiness to provide its northern neighbor with humanitarian assistance, “as human beings to human beings.”

Even though there has yet to be formal acceptance of the offer, Israel has begun logistical preparation to provide specific aid to Lebanon including medical equipment via the United Nations Interim Force in Lebanon (UNIFIL). Jerusalem has also relayed its proposed assistance to Beirut via representatives of Paris and Nicosia.

Tel Aviv municipality displayed a lighted Lebanese flag in a show of solidarity. The city’s Mayor Ron Huldai wrote on his Twitter account, “Humanity takes precedence over every conflict, and our heart is with the Lebanese people in the aftermath of the terrible disaster that they’ve suffered.” Residents reacted to the gesture favorably. “It’s a very kind thing to put this flag on this building, I like to see it,” Eylom Mizrahi told Reuters, adding that he thinks local citizens “care about the things that happens in the world, and not just here in Israel.” A Swedish resident of Tel Aviv, Fabian Maamari, said “we hope the best for them,” and “I really just hope that they will accept this aid this support from Israel.” 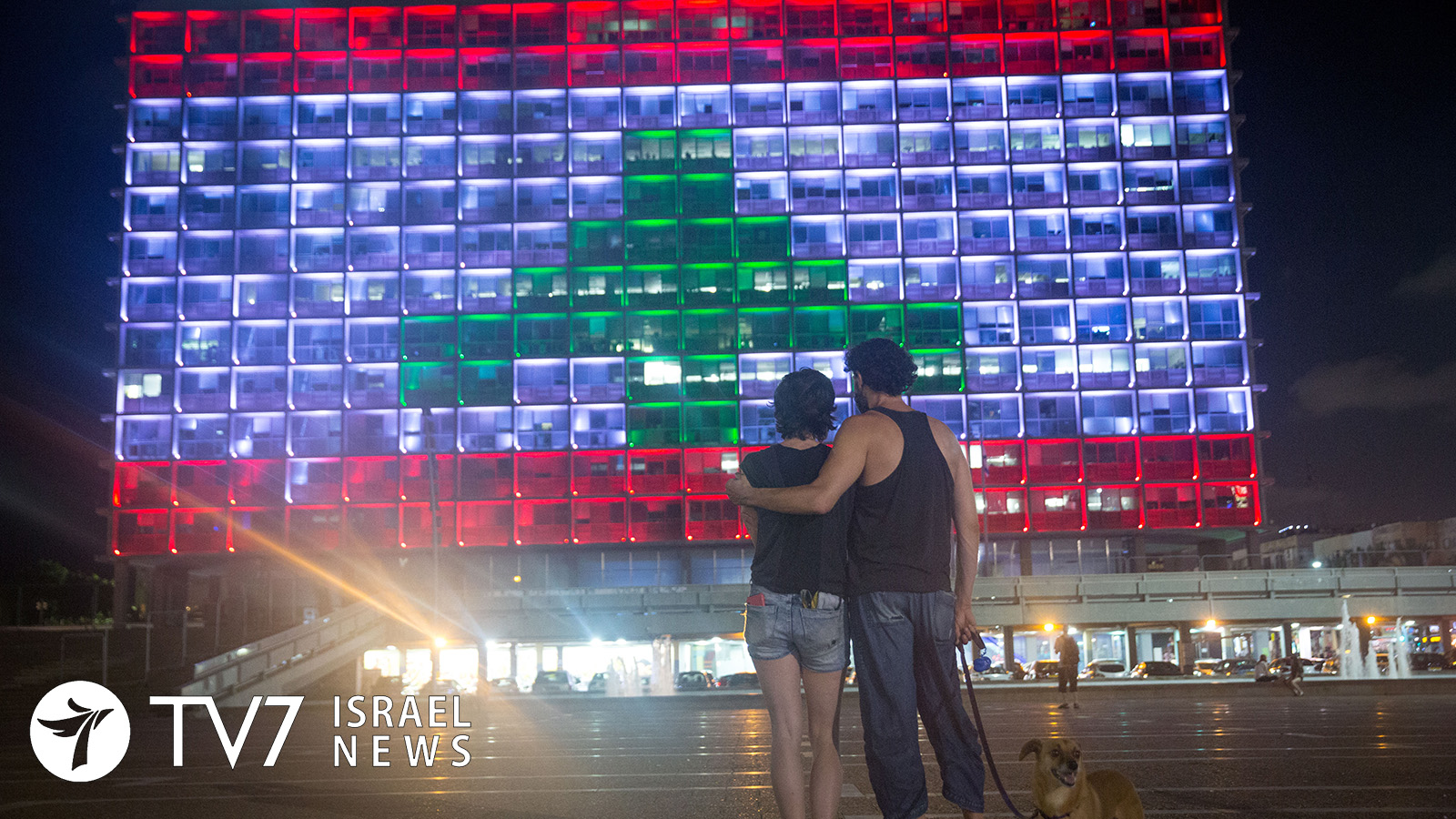 Meanwhile in Beirut, residents of the city are distraught by the repeated strife plaguing their country. With the number of victims steadily rising – including at least 135 casualties and more than 5,000 wounded – the deadly blast is merely the last in a long list of crises that relentlessly impacts the people of Lebanon. One person who asked to remain unnamed said “what should I feel? We in Lebanon, they wrote on Twitter that in Lebanon we survive, we don’t live. Every other day we have something, it started with the forest fires last year, and they said aircrafts would exacerbate the fires instead of distinguishing them, then the Revolution of October 17, then the economic crisis, COVID-19 and now this, we don’t know if it’s a warehouse (explosion, referring to the port of Beirut warehouse that exploded). If it’s a warehouse (that exploded) it’s a problem and if it’s war or an attack, this is also a problem. You can’t feel anything in Lebanon, there’s nothing to be sad about or to think about. Our country is this way, we have to get used to it.” Beirut resident Jeff Mrad said he was “disgusted with everything that’s happening. We now have this this difficult problem on top of everything that’s happening. I know that all my peers of the same age invested their effort in this country instead of another country and decided to stay here, to stand by their people. Now, look at what’s happening, we have gone backwards a 100 years. If we were younger, it would have been better to be in another country and to invest more in it.”

While the horrendous blast prompted numerous nations to respectively send humanitarian assistance, including search and rescue delegations to assist local efforts to deal with the crisis; French President Emmanuel Macron personally travelled to Lebanon in a declared show of solidarity.

“First of all I’ve come, almost straight away, to show a sign of support, of friendship, of brotherly solidarity for the Lebanese people after the explosion on August 4 in the port, which affected the whole population and the whole of Beirut. Above all, I would say, that support and solidarity is necessary because it’s Lebanon, it’s France, and it was my duty to be here to show that friendship,” said Macron.

The French leader further pledged to his Lebanese counterpart Michel Aoun that Paris would spearhead European support for Beirut, where France maintains strong cultural and political influence. Nevertheless, Macron also stressed the need to bring about reform to a country plagued by deep-routed corruption, in addition to social and economic strife, since Lebanon has struggled with its domestic woes long before the dreadful explosion rocked the nation, saying that, “Over and above the explosion, we know that the crisis here is a serious one and places historic responsibilities on the leaders. It’s a political, moral, economic and financial crisis, the first victim of which is the Lebanese people. It requires reactions extremely quickly. So, for me, this visit is also an opportunity for frank dialogue, a demanding one, with political leaders and Lebanese institutions.”

UK Secretary of State for Foreign Affairs Dominic Raab announced London’s offer of up to five million pounds in humanitarian assistance to Beirut, after holding a phone conversation with Lebanese Prime Minister Hassan Diab. “I’ve just spoken to the Lebanese prime minister, Hassan Diab. We are going to stand by the Lebanese people in their time of need. We’re going to provide an immediate response – an aid package, an assistance package, search and rescue, humanitarian assistance, up to 5 million pounds (€5.55 / $6.5 million), as well as expert medical support. And what’s crucial at this time is that our support is tailored to the very specific needs that I’ve just talked through with the Lebanese prime minister,” Dominic Raab, UK Secretary of State for Foreign Affairs.

The British top diplomat further emphasized that while the wider challenges facing Lebanon and the region have not gone away – focus right now must be limited to the immediate task of helping the people of Lebanon.

“The wider challenges facing Lebanon and the region haven’t gone away, we just focus right now on the immediate task of helping the people of Beirut and Lebanon come to terms and recover from this devastating explosion. Of course, we’ll also be looking at ways in which we can help with their medium-term challenges on governance, on financial support, given the situation,” Dominic Raab, UK Secretary of State for Foreign Affairs.

Secretary Raab also noted that in his conversation with Premier Diab, the latter emphasized his determination to conduct a full, thorough and rigorous investigation that will ultimately unveil what has caused the dreadful explosion.

“He’s been very clear with me that there will be a full, thorough and rigorous investigation to get to the truth. I think the people of Lebanon deserve no less and that there’ll be full accountability, subject, of course, to the results and the outcome of that investigation. I think it’s too early to say at this point with any reliability what the conclusions will be,” Dominic Raab, UK Secretary of State for Foreign Affairs.

The investigation of the cause is ongoing; the devastating blast is known to have originated from a warehouse in the port’s Hanger 12, which stored approximately 2,750 tons of the extremely hazardous ammonium nitrate; which was seized from a Russian vessel in 2013 that was travelling from a Ukrainian port to Africa. While the origin of the blaze that triggered the explosion remains obscure, the blast destroyed Lebanon’s main grain-silos that stored some eighty-five percent of the country’s grain. Moreover, the explosion almost entirely razed the water-front district, and caused extensive damage to three hospitals and other infrastructure at a roughly 1.5 kilometers radius. Furthermore, the United Nations Interim Force in Lebanon – which is tasked with preserving the armistice between Lebanon and Israel under Security Council Resolution 1701 – said that one of its maritime vessels, which was manned by several UNIFIL peacekeepers, sustained both injuries and damage. “Not only the port, has been completely destroyed, damaged, as well as the part of the city of Beirut. But one of our six ships has been damaged and several peacekeepers, they were in the ship with the Maritime Task Force, have been injured, one of them seriously injured, and they are being transported to the nearest hospitals in Lebanon,” Andea Tenenti, UNIFIL Spokesperson.

U.S. President Donald Trump insisted that while the presiding circulating assessment alludes to negligence as the root cause of the deadly explosion in Beirut – a random blaze in a highly hazardous location seems unlikely. “I can tell you whatever it was, it was terrible. But they don’t really know what it was. Nobody knows yet. At this moment they are looking, I mean – how can you say accident? Somebody left some terrible explosive type devices and things around, perhaps. Perhaps it was that. Perhaps it was an attack. I don’t think anybody can say right now. We are looking into it very strongly,” Donald Trump, U.S. President.

Despite the growing Iranian influence over the Lebanese government; President Trump asserted that relations between Washington and Beirut are “very good.” Earlier at the American State Department; U.S. Secretary of State Mike Pompeo highlighted Washington’s readiness to assist the government of Lebanon. “On behalf of the United States, I want to extend our deepest condolences to all those who were affected by the massive explosion at the port of Beirut yesterday. We stand ready to assist the Government of Lebanon and its – as it grapples with this horrible tragedy. You’ll see the United States announce a number of things we intend to do to assist the people of Lebanon in the coming days,” Mike Pompeo, U.S. Secretary of State.

Secretary Pompeo also reiterate Washington’s resolve to extend a U.N. arms embargo on the Islamic Republic of Iran – which continues to stand-out as the number one state sponsor of terror. To avert a reality in which the Islamic Revolutionary Guards would transport legally weapons to organizations such a Hezbollah; Washington proactively seeks to extend the embargo, which is set to expire in October. “Next week, the United States will put forward a resolution in the (UN) Security Council to extend the arms embargo on Iran. The Security Council’s mission is to maintain international peace and security. The council would make an absolute mockery of that mission if it allowed the number one state sponsor of terrorism to buy and sell weapons freely,” Mike Pompeo, U.S. Secretary of State

The top American diplomat further warned that if the U.N. Security Council fails to act on this matter, in spite of the fact that the U.S.-drafted Resolution is “eminently reasonable” (as he put it), Washington will ensure that the arms embargo on Tehran is extended. “One way or another – one way or another, we will do the right thing. We will ensure that the arms embargo is extended,” Mike Pompeo, U.S. Secretary of State.